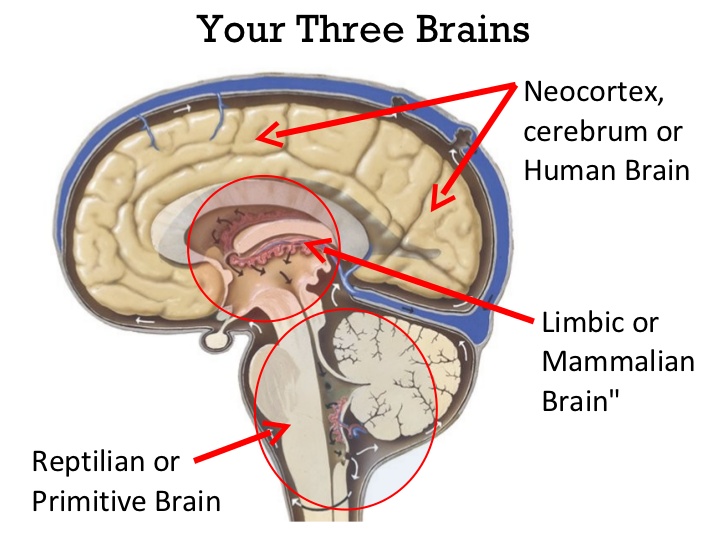 Your brain communicates within itself through tiny electro/chemical connections called neurons.  The human brain has millions of these little connections. They are the information highways of the brain, making thousands of connections every minute. Usually, they work just fine and we do life—in other words we react appropriately to stimuli:  someone smiles, we smile back, we pass the salt when asked, we stop at red lights, even when no other car is within miles, we give and receive respect and affection.  But sometimes these normal channels of information get “hijacked” by powerful but untrue thoughts that cause us to act in unhelpful and unhealthy ways.

In order to understand this, we need to understand some basic brain biology.  The human brain is not a homogeneous blob.  It has many distinct parts that perform different roles.  And, the human brain is not just a bigger brain than that of a lizard or a dog.  We have evolved structures in our brains those other animals simply do not have.  Yet, we share parts of our brain with those other creatures.

At the base of our brain is a small but vital structure called the amygdala.  It is the part of the brain we share with reptiles.  Its role is to keep us alive.  It regulates breathing, heart activity, etc.  It also controls the “fight, flight, freeze” response.  It can essentially only ask and answer one question: “Do I eat it or does it eat me?”  In other words, “Am I safe?”  For obvious reasons, the signals this part of the brain sends out are very quick and powerful.  They have to be.  Our lives are at stake.

When we perceive a threat, this part of our brain almost instantly dumps enormous amounts of powerful chemicals (such as adrenaline) into our system and redirects blood to our muscles and makes our senses hyper-alert to any possible threat.  This is good, but not as good as it used to be, say, a few million years ago.  Back then, the world humans lived in was very dangerous:  lions and tigers and bears, oh my.  Today, very few of us live in constant threat of being eaten…but for those who have been in combat, or those who grew up in chaotic or dangerous homes, this part of the brain remains on high alert.  More on that later.

Wrapped around this most primitive portion of the brain is the “limbic system.”  This is the part of the brain that we share with dogs and other higher-order mammals.  It is the seat of affection and bonding.  Reptiles lay eggs and leave.  Dogs give birth to live puppies and nurture them.  Lizards do not lay their heads in your lap and look into your eyes seeking connection and approval and they don’t come when you call, wagging their tails.  This is the sweet part of the brain.  It’s where love lives.

Understandably, this last, most complex part of the brain, the “neo-cortex,” is much slower to react to stimuli than is the “lizard brain.” And for that we should be grateful. If every time you saw a gravel truck barreling at you through a red light you had to wait for your neo-cortex to thoroughly analyze the situation before you slammed on your brakes, you’d have been dead long ago. But, the “fight, flight, freeze” response we all need comes at a price.

The price is that these primitive responses can take over when we don’t need them too. Sometimes, they can even do damage. That is called a “neural hijacking.”

In its extreme forms, we have come to call it PTSD, Post-Traumatic Stress Disorder. While that is something of an oversimplification, the essential truth remains. When we have experienced trauma, our response to relatively harmless stimuli can be out of proportion to the actual threat. A combat veteran sees a plastic bag blow by and he/she ducks for cover. A door slams and he/she spins around, fists clenched, ready for a fight. A colleague makes an off-hand comment and he/she reacts with an emotional rage.

Next blog:  What do do if we find ourselves getting hijacked.