Odysseus as a Role Model for Resisting Addiction 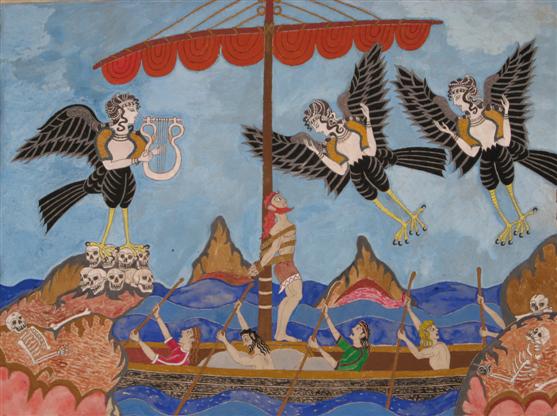 Odysseus as a Role Model for Addicts

Those of us in the addiction community can look back to our ninth grade English class for wisdom in inspiration.  It was then many of us were first introduced to the story of Odysseus from Homer’s Odyssey.  Odysseus was a great warrior, a “man’s man.”  He was fierce, gifted, courageous, and loyal to his wife, Penelope.  Yet, he knew full-well that desires can be overpowering.  So, he took steps to protect himself from yielding to temptation.  He set boundaries and he enlisted the help of others to help him stay true to his values.

Maybe you remember the story:  An oracle told Odysseus that his journey home would require him to pass the Island of the Sirens.  The Sirens were beautiful ladies whose lovely voices drew men toward them only to destroy them once they had yielded to their “Siren song.”  Since the journey past the Sirens was a necessary part of returning home, precautions were critical.

The plan was that Odysseus would have his loyal crew tie him to the mast of his ship while they would stuff their ears with wax and, thus, make themselves immune to the Sirens’ song.  Odysseus’ orders were explicit: “Do not untie me no matter what I say.”  In fact, he told his loyal men that the more he pleaded to be released from his constraints, the tighter they were to make the bonds: “If I implore and bid you to loose me, then do ye tie me fast with yet more bonds.”

Just as the oracle had predicted, and just as Odysseus had feared, the Sirens’ song was irresistible.  He begged his men to release him that he might go and enjoy their charms.  But, true to their vow, the more he pleaded to be released, the more his loyal friends (whom he called “trusty comrades”) restrained him: “Perimedes and Eurylochus arose and bound me with yet more bonds and drew them tighter.” Odysseus spent a miserable few moments as his ship passed by the Island of Sirens. His momentary desires were at war with his deepest values and only his wise planning and good friends stood between him and certain shipwreck.

The story had a happy ending as Odysseus and his crew were able to safely pass by the temptation and avoid destruction.  Prior planning and constancy of purpose had prevailed.

The analogies to addiction are obvious.

Life’s journey home often leads us near temptations.  We need a plan if we are heading into dangerous territory.  We need friends like Perimedes and Eurylochus to surround us with care, even when we complain and whine that it’s not what we want—in the short-term.  We need to remember that moments of temptation will pass if we “surf the urge.”

We encourage the addicts with whom we work to be clear about their core values, to develop a “travel plan” or a “fire drill” to help overcome the inevitable urges to act out, and to surround themselves with “trusty comrades” who will speak the truth in love when needed.

Odysseus’ deepest longing, his highest value, was to return to his home and to his bride Penelope (who was facing her own temptations, if you remember). His clarity of purpose, his wise plan, and his good friends got him through and, eventually, home to his beloved Penelope.